End of the World

As the 90's sensation REM once sang, it's the end of the world as we know it, and I feel fine. From the Mayan date of December 21st, 2012 to the numerous Nostradamus predictions and Y2K, the end of the world has become a popular topic in our culture - one that most people fear and spend their waking hours preparing for. With little more then booze and sex on your mind, it can't be expected that you'd give much of a shit - so why not raise a glass to the sky with fellow students and let out a confident "bring it on!"

Though the “end of the world” may not seem like the easiest theme to implement, you may be quite surprised as to how quickly the ideas flow once you get into it. There are two ways to go about this type of scenario: Have the party celebrating the coming apocalypse or base the party on one of several post-apocalyptic scenarios.

“End of the World” Welcoming Party

This scenario may be the easier of the two to implement. You won’t need much of a set-up, save for maybe a clock to count down to the world’s end. Here, you’ll just want to ensure there is ample alcohol to allow everybody the chance to get shitfaced and forget that world is ending. Invest in some colorful décor to counteract the typical “doom and gloom” attitude that would come with the apocalypse and create a playlist of up beat music.

Since the apocalypse could come in many different forms, you need to decide how the world is going to end. No matter how you decide the world will end, there are a few staples of an “apocalyptic environment. First, go with dim lighting to give the allure of something like a fallout shelter or a broken down abode; turn off the florescent lighting and spend a few bucks on some gas-lit lanterns to spread throughout the space. For that true authentic “end of the world” feel, hide or disconnect as many modern day conveniences as possible (of course, leaving the keg and stereo alone). You could even go the extra step of recording a faux news broadcast that can play in the background on the last standing TV. The rest of the set-up is dependant on how your world is going to end. Zombies? Throw some splatters of blood and bloody handprints on walls, windows, and doors. Toxic Dust Cloud or Mysterious Fog? Spray a thin layer of washable spray paint on any nearby windows to give the outside a “foggy” appearance. 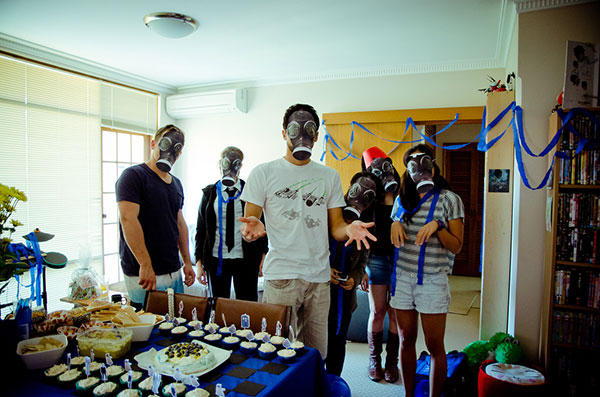 Again, attire will be dependant on the inner workings of the party itself. Pre-apocalypse parties really won’t need much of a dress code. Maybe a gas mask or two in the crowd, but really, most people would just like to be comfortable for the end of the world. For those post-apocalyptic affairs, the dress code can get a little creative. Picture how you look after a long night of partying and exam crunching. Now put a few holes and tears in your outfit of choice, throw on a survival backpack, and you’ll be ready for the affair. Be careful if your party is fueled by the zombie apocalypse, as plenty of guests will want to come dressed as the rotting dead. Encourage guests to come as survivors rather then those that perished - you don’t want this thing turning into a Halloween party.